Crises always present opportunities. In the current situation, we all have the opportunity to remember what really matters. This issue of My Point of View features the perspective of Brian MacKay-Lyons, a Canadian architect. He believes that community is no less important than privacy. Deeply rooted in his local community, MacKay-Lyons creates world-class architecture that incorporates culture and nature in unique ways.

Nova Scotia – New Scotland, a peninsula in Canada’s far east, is an embodiment of quintessential Atlantic scenery and culture: rugged cliffs separate rolling, green hills from the Atlantic coastline. For the locals, nature is an intrinsic part of life. Brian MacKay-Lyons is one of them. As a proponent of vernacular architecture, he relies on locally sourced materials and local building traditions. His projects demonstrate the significance of context; they bring the landscape to the fore and artfully merge traditional and modern construction techniques. Brian, now 65 years old, grew up in Arcadia, a small community in Nova Scotia, where he spent much of his life. The area has had an immense influence on him. When we spoke to him online, he was sitting in one of the buildings that make up the family farm in Upper Kingsburg. With the Atlantic Ocean stretching out in front of him, he watches construction workers do their jobs on the farm and glances at the kayak he and his wife like to take to sea frequently.

“To me, a good day is when I go outside, ask the workers how they’re doing, maybe bring them some supper at night.”

Brian currently works from home, from his farm. He digitally convenes with the team of his company, MacKay-Lyons Sweetapple in Halifax, about an hour and a half away. His award-winning architecture firm was founded in 1985; his partner, Talbot Sweetapple, joined in 2005. Much like Brian himself, the joint company specialises in modern and progressive designs that respect their local context in unique ways: they incorporate the surrounding scenery, culture, climate and materials. Brian and Talbot share a crisis-proof philosophy that is likely to be proven right again and again in the near future. “In purely architectural terms, the current situation has not had much of an impact on our views. We have always been interested in ways to combine community and privacy. Both are interesting to us. We believe that we, as human beings, want to be part of a community. We don’t want to be isolated. But we still appreciate our privacy.” 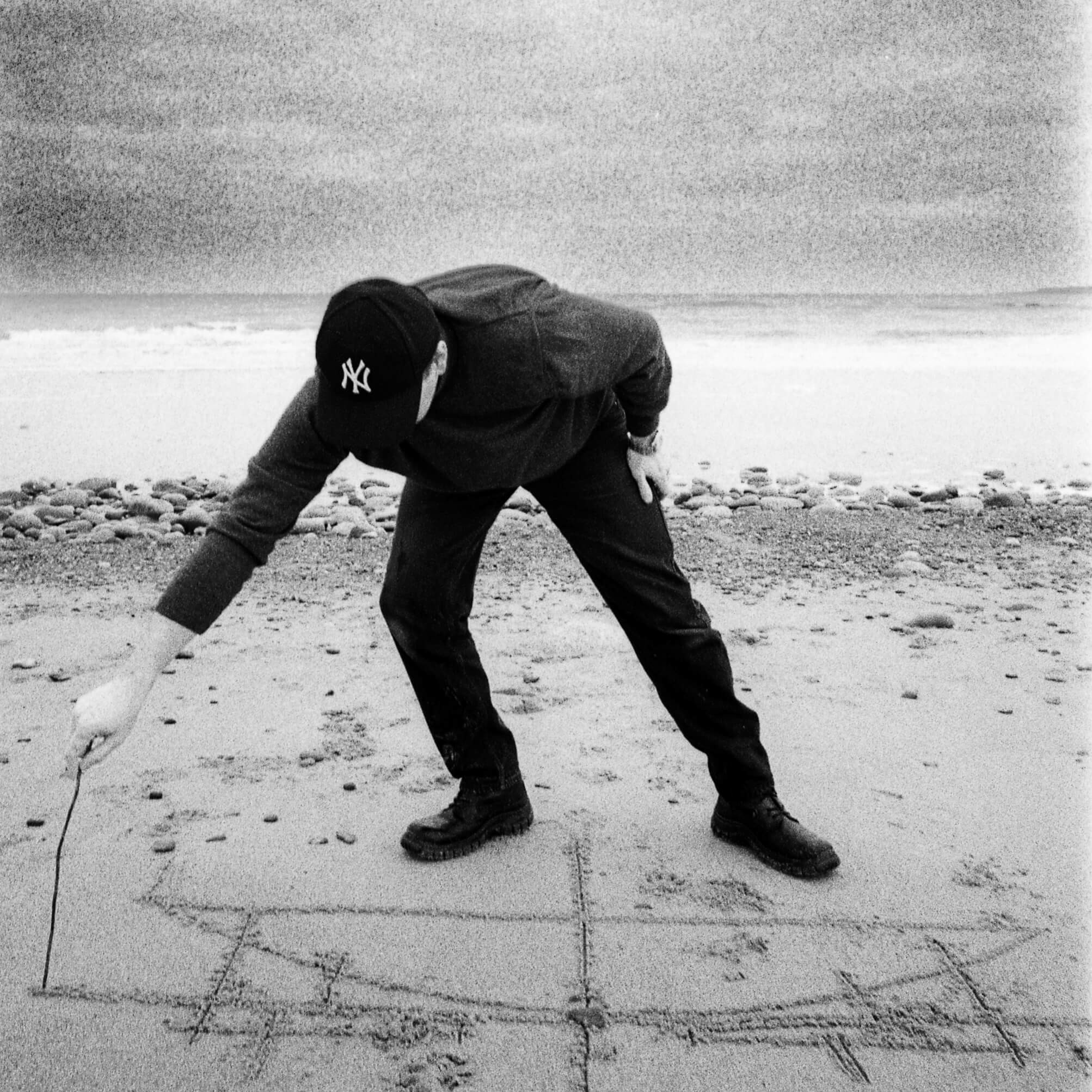 Brian MacKay has touched upon an aspect that has become more important than ever: we seek safety and community at the same time. “That is a part of our culture: community is no less important than the self. We want to take both into consideration when we design our projects. On the one hand, we want to look at the world and our future. On the other hand, we mustn’t lose sight of our neighbour’s front door.”

“Humanity has forgotten how to build good cities and villages. Privacy and community are equally important.”

Working with the local culture and conditions encourages a mindful approach to resources and costs. “Economic viability is about sustainability as much as it is about democracy and accessibility. We have a whole generation thinking that they will never be able to afford a house. And we have always been more interested in Volkswagen than in Porsche. Ultimately, economic viability also incorporates an element of aesthetics. The economical utilisation of resources produces elegance in any human activity, no matter if you are an academic, a businessperson, a painter or a poet.”

Community at the core

Brian MacKay-Lyons’ world view stems from his own upbringing in the culture of North America and, specifically, Canada. “This country was colonised by farmers seeking opportunities. There is a large indigenous population, and we have mixed with them quite thoroughly. The result is a culture characterised by sharing and giving.” This deeply humanist attitude, which puts humans and community at its core, is reflected in all of Brian’s work.

“We have a farm here. I am a farmer – for sure a farmer. This farm is our family home. But it is also a meeting point for a global community of architects, musicians and other artists.”

Brian’s love for community and, in particular, his family is obvious: he works with his own children. His oldest daughter is a Structural engineer, his younger daughter is a veterinarian and his son is an intern architect. And yet: besides the local aspect of Brian MacKay-Lyons’ life, there is also a global ambition, a connection with other cultures. He was lucky enough to know the simple life into which he was born but to also experience the polar opposite. “We are all children of our era. My parents lived through the Second World War together, and they travelled together. They were the first generation of the travelling middle class. And they gave me a great gift: the ability to live in a forty-people village in the middle of nowhere and play in the forest on one day, and then find myself in the middle of Rome on the next.”

“I will never forget the day we visited the Roman Forum. My brother and I tried to wrap our arms all the way around a large Roman column, as children will. That’s when I realised that I would be an architect.”

Architecture with a soul
Brian MacKay-Lyons draws a great deal of inspiration from his travels. Although he discovered his life’s purpose at the tender age of four, there is more to his life than architecture. His other great passion is music. A highly talented musician, Brian was about to become a studio drummer before he embarked on his architectural journey.

“Music is still incredibly important to me. I don’t play as much as I used to, but music has given me a certain approach to aesthetics. Unsurprisingly, many good architects are also musicians: both disciplines happen in the same part of the brain.” Brian MacKay-Lyons’ work is not all brain, though. There is a big dose of soul in it, too. “Someone I know recently received an honorary doctorate from a university. He mentioned me in his speech, I don’t know why. What he said was: ‘Brian MacKay-Lyons has soul.’ And soul is rare. Muddy Waters and Aretha Franklin had soul.”

Client relations as a recipe for success
That soul and that love for people are reflected in the way Brian deals with his clients. “We always take our clients on an intellectual journey. Many architects believe that clients only understand renderings, not concepts. I would say that’s an insult. Humans are very good at abstraction. We treat our clients as equals and talk to them about, say, the history of architecture. They share their world views with us. That exchange forms our relationship

“Many people ask me how I get my clients to join me on that intellectual journey. All I can say is: we don’t do business on the back of bankrupt service providers, and we don’t seduce our clients.”

His deep roots in his own community and his travels have shaped Brian’s world views deeply: “I believe that it is the poor who create culture. I don’t mean that in an anti-intellectual way, mind you. I think both aspects are important. I do look at the sights when I travel, but I walk through the back alleys, too.” 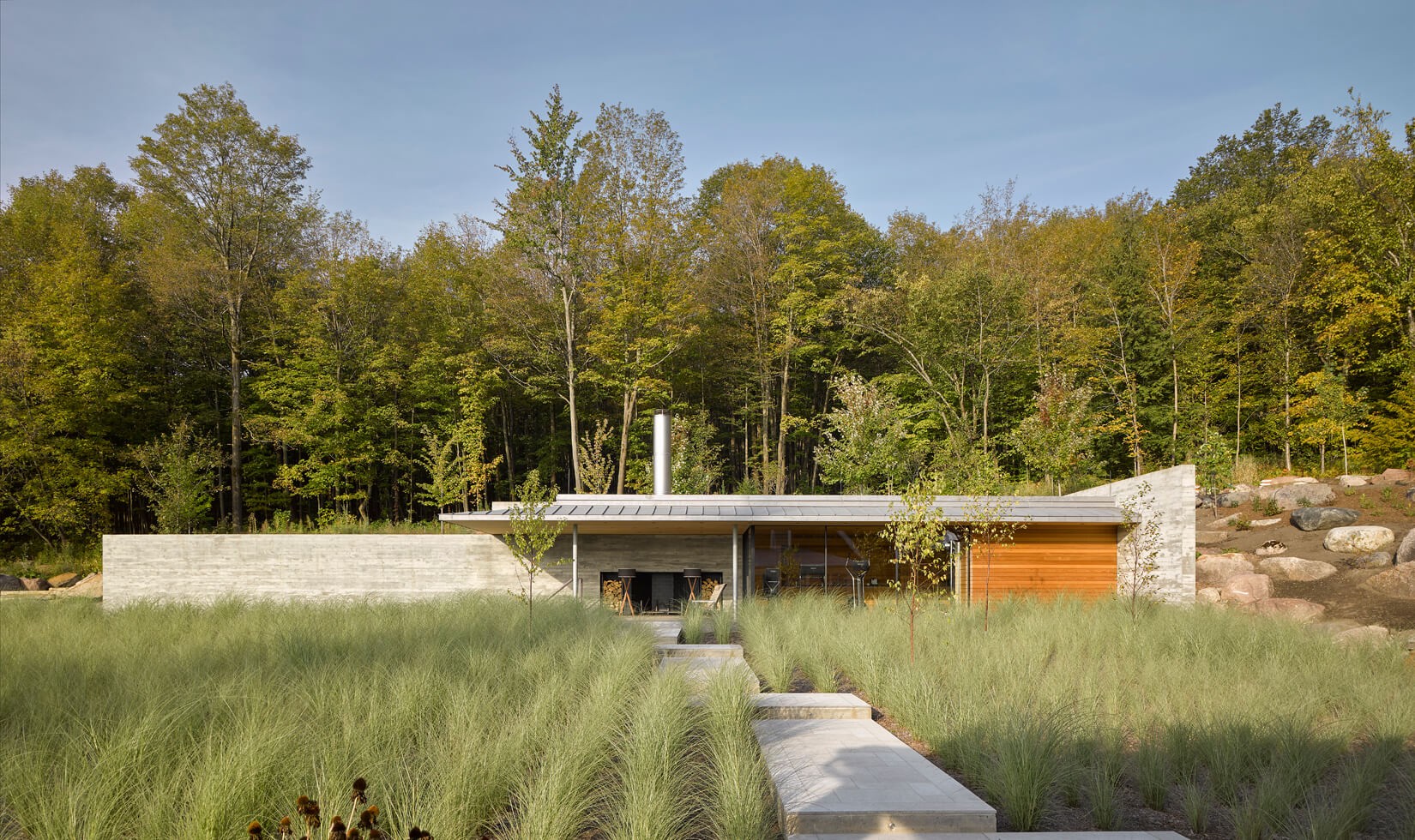 “Ferdinand Porsche designed the Volkswagen, and he designed the Porsche. The Pool House in Quebec, for which we used Sky-Frame products, is such a Porsche.”

The house is built into the flank of a mountain west of Montreal. Inspired by Ludwig Mies van der Rohe’s 1929 Barcelona Pavilion, the Quebec Pool House is a minimalistic project: a seemingly simple structure made with extreme sophistication. It seamlessly blends into the scenery, inviting it to seep into the interior. 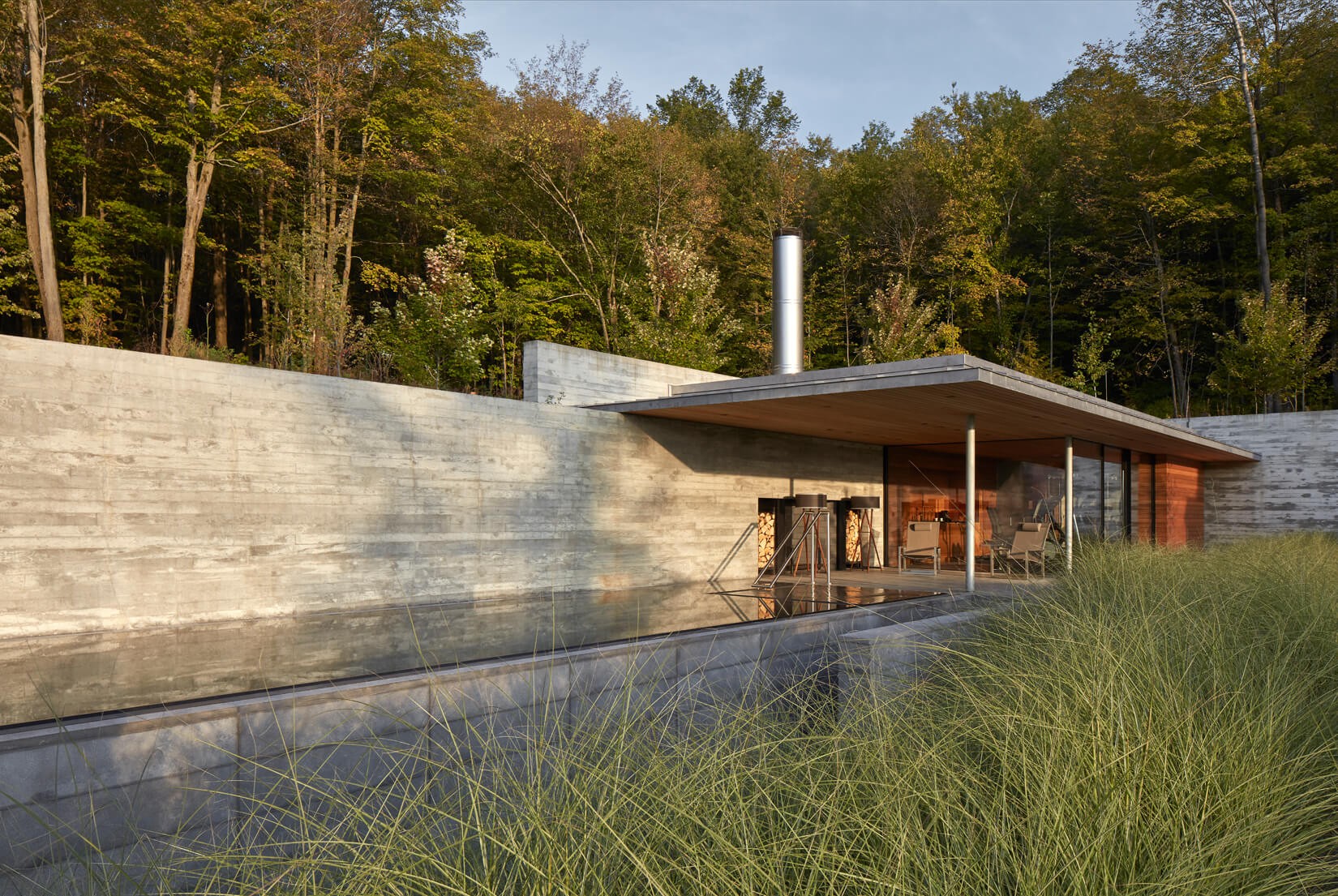 A smooth transition between outside and inside
“Designing facades is the hardest thing in architecture. Learning to make good facades takes a whole lifetime. It’s all about dealing with window areas and non-window areas. And when it comes to window areas, Sky-Frame is the best of the best.” For his Quebec Pool House, Brian MacKay-Lyons created a smooth transition between the outside and inside. The entire space can be turned into an open-air area, and you are never fully sure whether you are indoors or outdoors. There is a transition that runs from the outdoor area in the pool through the covered outdoor area to the outdoor area by the fireplace, ending in a space that is clearly indoors – until you open the windows, that is. 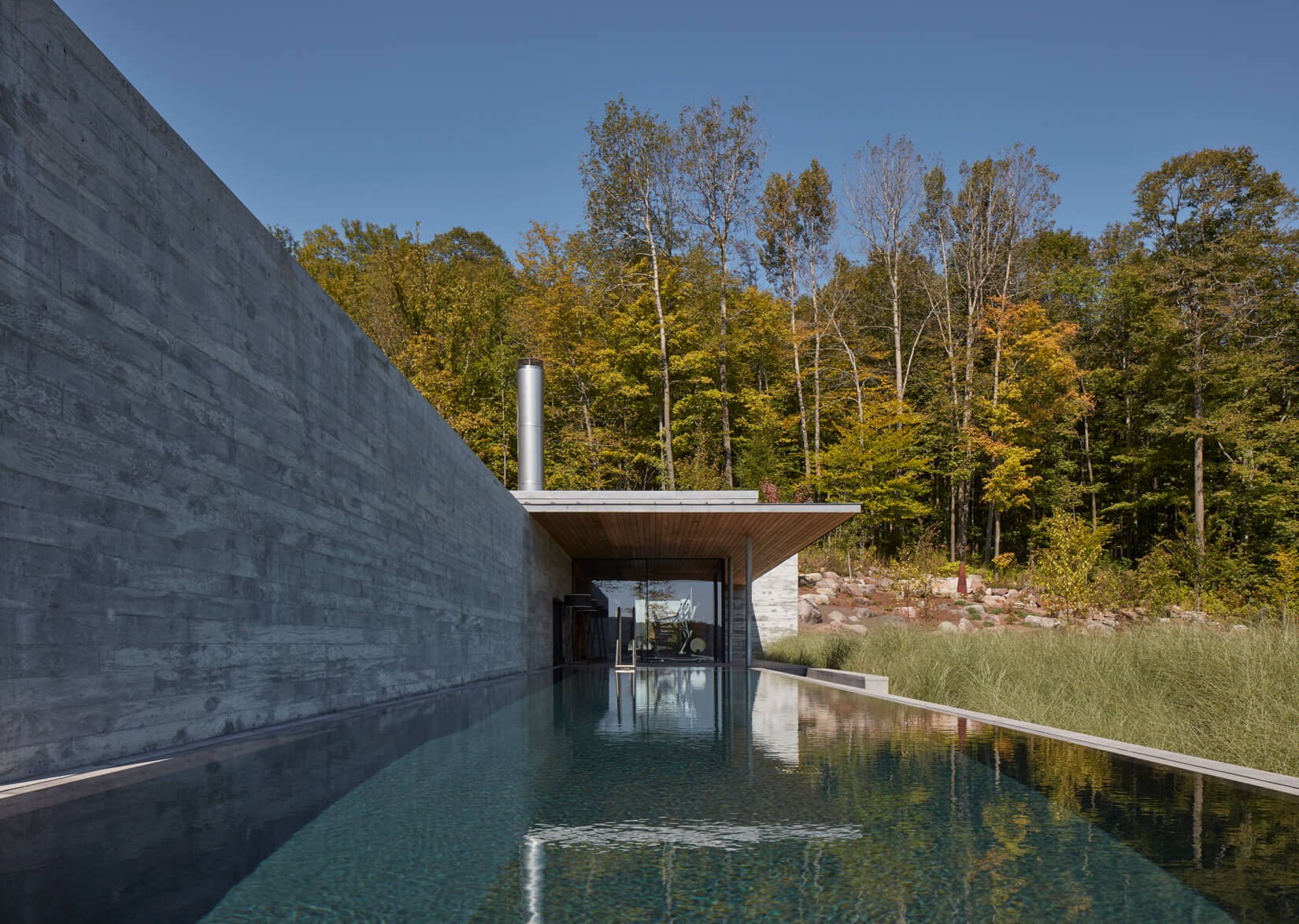 Despite the intricate design, the Quebec Pool House reflects the central aspect that connects all of Brian MacKay-Lyons’ works: “There are many expensive, professionally designed houses that aren’t particularly exciting because they do not incorporate the quiet dignity of a simple farmer. The true masters of any art are familiar with the simple life.”

The Canadian architect Brian MacKay-Lyons (born in 1954) is best known for his houses on the coast of Nova Scotia. He uses locally sourced materials and local construction techniques for his projects. Brian MacKay-Lyons is a founding partner of MacKay-Lyons Sweetapple in Halifax. He also works as a professor at the Dalhousie University School of Architecture in the same city. After studying architecture at the Technical University of Nova Scotia, he completed a master’s degree in Architecture and Urban Design at the University of California in Los Angeles. He has also studied and worked in China, Japan and Italy.

Brian MacKay-Lyons returned to Canada in 1983 after several stays abroad. In 1985, he established his own architecture firm. His business partner, Talbot Sweetapple, joined him in 2005. Together, they founded MacKay-Lyons Sweetapple Architects Limited. The company has won many awards, including the gold medal of the Royal Architectural Institute of Canada in 2015, two honorary awards from the American Institute of Architects, eight Canadian Architect Awards and many others.

Conscious architecture requires a vision. In a conversation about sustainability, balance and negative space, Dara Huang shares her approach to designing meaningful and lasting spaces. 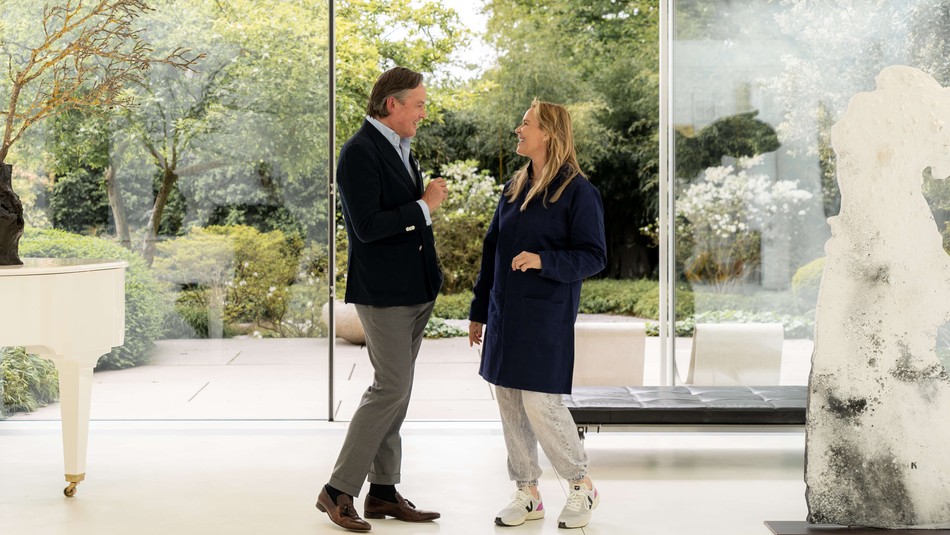